“People change for two reason; either their mind has been enlightened or their heart has been broken”

Seemingly I saw that phrase written at the corner of a magazine page. The old guy that sits next to me has been reading it for quite sometimes before he falls asleep soundly. It was one hour to go before the train arrives at Denizli, from the window morsel with light rain I could see the bright orange sky was slowly turning to dark violet. Swirling sound of steel hitting the bottom of rail creates a humdrum music.

There was nothing such interesting with the scenery. An abundant of orange field crisscrossing towns that looked similar one to another, every half an hour or forty-five minutes the train will stop for a while at a designated station. Beside the old man that sleeping next to me the wagon was dared empty. I counted there was a total of seven people including me and nobody seemed knowing each other. No conversation, no sound of chit chatting neither a ring of a phone. The emptiness and constant humming of the train machine felt excruciating.

It left with one more station before I’m arrive at Denizli. I tried to sleep, knowing that my journey won’t end there and it will take sometimes before I can lay my body on a real bed but my restless mind wandered following my restless eyes.

Like most of lone traveler who travels self-sequestered in the middle of winter, I was in the habit of observing people and promptly respond a small chat. I never know where a glance of conversation can lead me and also eager to guessed what was triggering a smile of a random people. Often I make a hypothesis of what makes people happy? Question that – yes I know – led me to million probabilities of answers.

Initially I wasn’t including Pamukkale on my travel list but the guy whom I met at the guesthouse in Selçuk gave me brief information about Pamukkale and its travertine. It was only a brief, incomplete profile, but it was that incompleteness that drew me in. I decided to swerve my route and instead of directly go to Konya; I detoured and plan to spend a night in Pamukkale.

The train arrived exactly at 7.45 pm, I scurried to the exit doors while looking at my watch. I have 10 minutes to run for bus that will drive me to Pamukkale. Luckily the bus station located just couple of meters away to the east of Denizli train station. Knowing I have an ample time, I was slowing my pace and stopped at one of the hawker stall at the corner of the street and bought a loaf of bread.

You couldn’t miss the bread stalls in Turkey!

Its bright red color, its warm radiant yellow light and the aroma of freshly baked bread lured you to stop and all you need to do is to surrender. Warm bread in cold windy winter is an ember of happiness; it’s a simple match that suits everybody altogether. I handed a fifty Lira bank notes to a guy who seemed too tired to paying attention to my order and exchanged it with a handful loaf.

The night was mingled when I finally arrived in Pamukkale. The bread I purchased earlier wasn’t really helping to keep me full. I decided to hit the closest restaurant or café that I can find. After an episode of lost-in-menu-translation, I got a plate of what seemed to be a mix kebab. A guy that seemed to be on his mid 40s grabbed a chair next to me and sat, I smiled and silent.

Sitting with someone you didn’t know was a dicey preposition. You could be met with a total silencer and pretend there’s a million of light distance between you and resounding silence but you could also be met with a chatterer or a questioner as in my case.

“First time to Pamukkale? He asked

I simply nodded to answer.

“Good time, you’ll have the best view since the area is vacant. During summer Pamukkale filled with tourist, there won’t be a space for admiring its beauty”

Winter is an off-season; I don’t need to battle large group of Asian tourist or hundreds of multicultural couples. I came at the peak of Pamukkale’s emptiness or solitude as I see it from other perspective.

Apparently there is a rule to remove a foot gear before entering thus area to preserve the calcium deposit from human pollution.

The city was similar as at the time I arrived last night; almost empty with one or two cars was passing by in a high speed. The grey sky colored by a weak ray of sun and most of the shops sluggishly opened. I set my slow pace as I walk from the guest-house heading east towards a mound of pale white resembling an iceberg. I was greeted by sleeping dog, ball furred in front of the gate. Except three Turkish teenagers and me who arrived at the same time, Pamukkale seemed completely empty! Afar I could see tiny human in colorful coat as if it succumbed into the grand white of Pamukkale.

Couple of feet from where I stand, I could see a clear boundary between Pamukkale and the other area.

I gaze around and it didn’t take long to be dazzled by Pamukkale scenery! 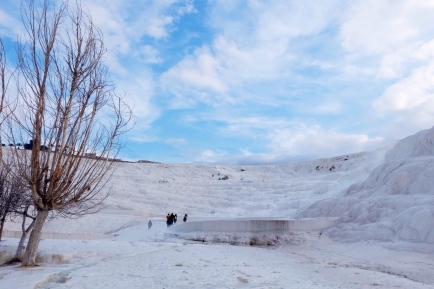 man gazing at the white wall 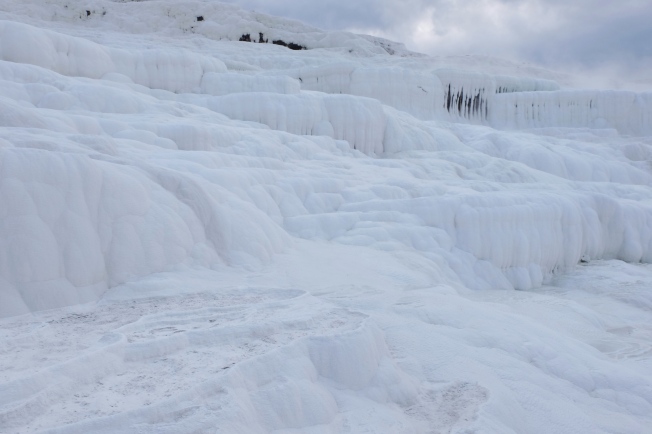 an abundant of white

An abundant of white, was came in a form of line and bound! Without a prior knowledge, one will found it difficult to distinguished the deposit sediment made of calcium from stack of snow or a pile of artic iceberg. A hanging limestone eroded by water creates narrow space and beautiful texture, hence the name of “cotton castle” perfectly depicting Pamukkale.

I rolled my pants and removed my shoes at the edge of hillside before slowly walked. Just a second before the shocking sensation hit me! My feet suddenly paralyzed by the strong icy sensation inclining from my soles. I tried to walk slowly but the stabbing pain makes it difficult to stepping in. At that moment, I found the answer why Pamukkale is empty during winter. It was almost impossible to bear the pain walking barefoot.

“It will takes sometimes before you get use to it. Try to stop at every travertine and soaked your feet. It helps to ease the pain” An Asian girl on red coat who sat at the edge a pool of warm water responding my grinning face.

I tried to distract myself by gazing around, quickly revolved in the eerie view of the landscape that has been attracting millions of people since second century BC. Here the Roman built Hierapolis, city where many patrons were retiring and dying. The spa was obviously famous and legendary known for the healing effect.

Afar I can see the flowing hot water evaporated to the sky the moment it touches the cascade blue-white travertine over a pearly hills. It creates a thick steam like a foggy morning at a peak of mountain forest. It cools quite rapidly as it move downhill and leave a warm trace at the shallow pool where I dipped my feet. 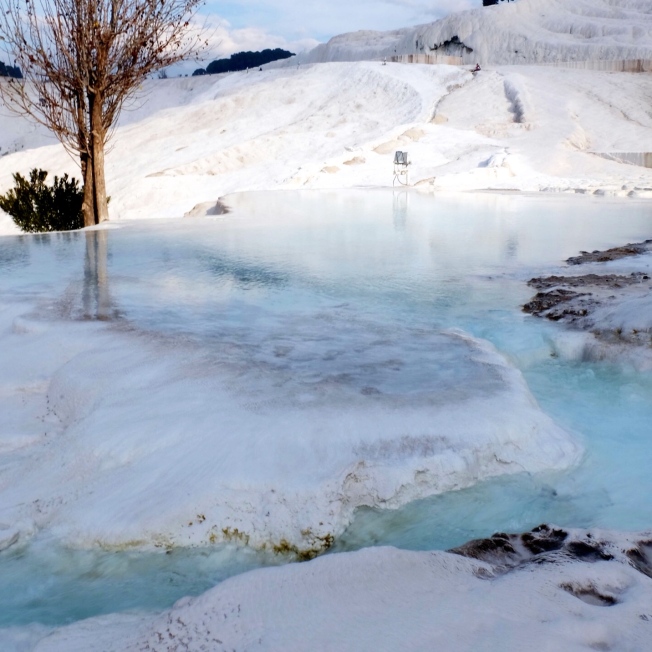 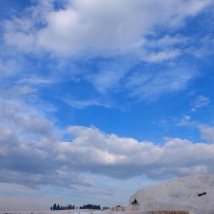 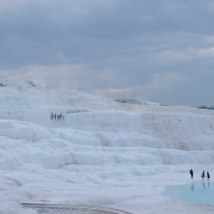 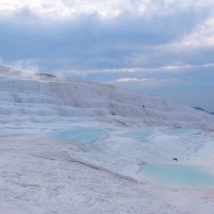 Pamukkale and the infamous travertines

Indeed it was taken sometimes to get used to the icy sensation. After awhile, my sense was no longer able to distinguish between cold, burn or pain? It becomes dull meanwhile the sensation lingers.

I laughed as I dipped my feet in a pool of warm water at the other edge of Pamukkale. Realized that this how its work. Some pain shouldn’t be wished away so easily. It had to be dealt with, even embrace, without an agony but as simple reminder how good it was before all of it starts.

Pain is completing the sense of life.

“Where is the exit?” I asked a guy in uniform who observed visitors entering the pool.

“Down there” he pointed my starting point

“You mean I need to walk all way down again?!”

I stood silently for a while before laughing over the bitter information. “Beauty is somehow closely related to pain” unfortunately today I learned it in a hard way…

3 thoughts on “An Abundant of White”